After the cards are dealt and each player has had some time to study their own 13 card hands the Bridge auction for that hand begins. The dealer for that Bridge hand starts the auction and the action rotates clockwise. Each player makes their call during their turn and the turn.
The auction concludes if three passes happen back to back to back after the dealer has made his first call. If the dealer starts by passing and the three other players all pass then the hand is not played. If a hand is passed out on the first round the dealer re-deals the hand unless Duplicate Bridge is being played.

During the bid a player calls a level and denomination. The level is the number of tricks and the denomination is the suit. The idea of the bid is that the bidder is declaring that his pair is willing to play the contract. Each bid must be higher than the preceding bid either by level, denomination or both. So to make a sufficient bid the player has to increase the level of the bid or choose a higher ranking suit on the same level.
Levels are ranked numerically upward from 1 on. Denomination are ranked by the strength of each suit. The rankings of the suit from weakest to strongest: Clubs, Diamonds, Hearts,
then Spades.
For instance, to increase a bid of 2-Diamonds a player must either increase the level to at least 3 or choose 2-Hearts or 2-Spades. Players can choose to double their opponents bid instead of increasing the bid. If the bid is doubled then the option to the other team is to increase the bid, pass or redouble.

Auction Bidding continues until there are three consecutive passes. When the Bridge Auction Bidding ends the last bid becomes the contract, with the double or redouble being taking into account to determine the scoring at the end of the hand. The level of this auction bid determines the number of tricks that pair must take in order to fulfill the contract. The suit of the bid determines the trump suit, unless no trump suit was bid.

The double option in Bridge during the auction phase is a powerful tool to pass information to a partner and to increase the importance of the current bid. The double can only be used after an opponent has made a bid.

The double is meant for a player to use when they believe their opponents will not be able to fulfill the contract.

In reality, many doubles are used to pass information to their partner. This information is meant to give a partner a better understanding of how to proceed during the bidding.
For Example, doubling after an opponent starts with a low bid like 1 Diamonds can suggest to a partner a variety of different things such as asking the partner to bid and information about the strength or weakness of a their hand.

The pair who has had their bid doubled has the option to redouble during the auction further increasing the scoring if that bid becomes the contract.
When the auction ends the double or redoubles become part of the contract. 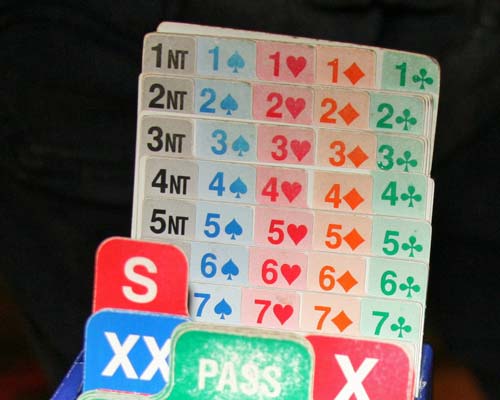 The auction portion of playing Bridge is one of the most important aspects of the game. A lot of focus and gamesmanship are placed on creating a challenging contract. The integral part of creating the contract is the increasing bids made by each pair until the point is reached that the opposing pair believes the current bid is likely not to be made.

The bidding occurs during the auction after the cards have been dealt and players have had an opportunity to organize and study their respective hands.

What makes the bidding difficult for each pair is the process of creating a final contract that if fulfilled earns the pair the most possible points while not being too risky that if the contract is unfilled the pair gets penalty points. A high success rate amongst the world’s best Bridge players comes from their ability to communicate their hand strength and hand weaknesses with their partner during the bidding.

To create a good contract, each pair must communicate with each other enough information about their hands. This would be easy if each pair could talk to one another, but in Bridge the information that can be shared with a partner is restricted and that includes verbally discussing their hands. The way partners can communicate with one another is through the calls they make while bidding.

Each call is used as a means to pass information to the partner, such as I have a lot of high diamonds or I have a very balanced hand. During the Contract Bridge auction, the bid is heard and its meaning is understood by the opposing pair. Each call’s meaning will be understood by the opposing pair as the information about the call’s meaning is openly shared at the beginning of the match.

Gradually increasing the stakes of the contract during bidding allows pairs to exchange more information with their partner about their hand. Conversely, quickly increasing the stakes of the contract during bidding reduces the amount of information that will be exchanged with each partner. Both pairs use bidding strategy that aims to gain enough information as quickly as possible to arrive at a favorable contract. By using bidding tactics, careful evaluation of the available information and deduction pairs put forth an effort to push their opponents to bid contracts that are difficult to fulfill while creating contracts themselves that are attainable.

These common Contract Bridge rules of thumb for bidding are known as Bridge Maxims. Though not always true, most of the time the play suggested should be followed in that situation.