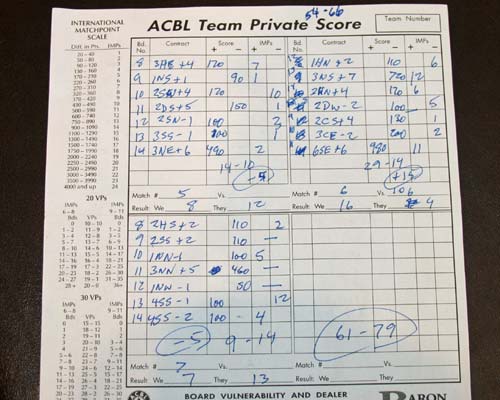 Points are the objective in playing Bridge and therefore each pair tries to score the most points on each hand.

Points are scored in several different ways. The most important Bridge scoring is based on the level of the contract. This makes the bidding very important because the points scored when a team bids 6 no-trump compared to 2 no-trump and fulfills the bid is a great deal different. The reward for higher bids makes the auction to decide the contract very competitive.

Bidding high such as to level 6 or level 7 – a sweep of all 13 tricks – makes for challenging hands that are handsomely rewarded if accomplished. High bids are often done when one pair has no interest in bidding and the other pair holds strong cards.

The contract made by the declarer has the opportunity to earn points in these circumstances:

The Defense pair has an opportunity to earn points if the Contract is not fulfilled by the declaring pair.

Bonuses are very important to winning Bridge matches and having success in Duplicate Bridge Tournaments. Pairs earn bonuses by bidding and completing contracts at certain levels. These certain levels vary by points but the most important are games with point total at least 100 points. These important 100 or more point games are are known as “Game“. The Game level is different depending on the suit.
The value of the Game Bonus is so important that much of the bidding during the auction focuses on whether a team can make game.

Contracts made below Game level are called Partial Contracts or partscores. For example a 3 Spades is below the Game Level for Spades (4 Spades which is 10 Tricks) and thus the 3 Spades Contract is a partscore.

The Small Slam is an additional bonus when at Level 6 twelve tricks are taken.

Though it does not happen often, the Grand Slam is the best Bonus. Taking all thirteen tricks on Level 7 is fulfilling a Grand Slam.

There is one additional level of complexity which has been added to Bridge scoring and that is the concept of Vulnerability. Vulnerability has a great impact on Bridge strategy during both the auction and during the play of the hand.
Before each hand, each pair is assigned vulnerability. One pair is designated vulnerable and one pair is designated non-vulnerable. What vulnerability does is affect the Bonus Scoring and the Penalty Scoring. When vulnerable points are increased for the game bonus and for the slam bonus. However, being vulnerable also increases the penalties for failing to fulfill the contract.

As mentioned above, when the declarer’s side takes more tricks than they bid and the bid was not doubled, then not only does the pair earn points below the line for the contract, but the pair also earns points above the line. The above the line points earned are the same as for bid tricks, 20 points per trick if one of the minor suits was trumps, and 30 per trick if one of the major suits was trumps.
The score for overtricks really changes when the contract was doubled or redoubled. The bonus for overtricks when the contract is doubled or redoubled does not depend on minor or major suits but instead depends on whether the team was vulnerable or not vulnerable.
The score per overtrick: 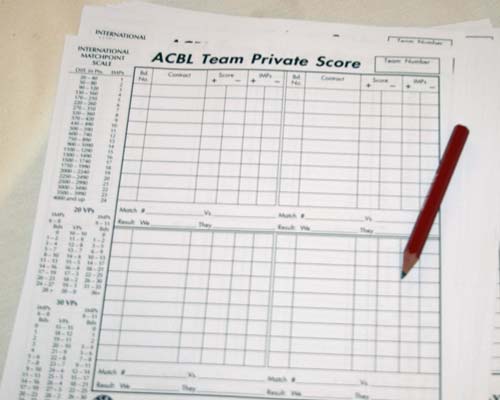 The two major scoring methods are the Rubber Scoring and Duplicate Scoring (Chicago Scoring). Similar in many respects, the main variation is based on how the points are counted.

Duplicate scoring method is simply adding all the points, bonuses and penalties together making a single score for each hand that is played. The winning pair for that hand would express their point score as a positive number and for their opponents the score would be expressed as a negative number.
In Duplicate Bridge tournaments, the ability to compare scores when all participants are playing duplicate hands makes it important to bid well during the auction and to play well during the play of the hand.

Rubber scoring the declaring pair earns points for tricks and writes them down below the line on the scorecard.  Points below the line can be added together to make game. Penalties and bonuses are recorded above the line. The first pair to win 2 games earns a rubber bonus.

In Duplicate Bridge tournaments each pair earns points during each hand and the pair with the most points after all the hands have been played wins the tournament.
After the score for that board has been compared to the other pairs, the relative scores are turned into match points. The most Match Points -MP- or International Match Points -IMP- are awarded to the pair who scored the best on that board and less points are given to the next best pair and so on with the worst performing pair receiving the least amount of Match Points or International Match Points.
This method of Duplicate Bridge Scoring is the most fair method because every pair is playing the same set of cards so much of the luck of the deal is removed from the game. The best decisions during the auction and during the hand result in pairs outperforming other pairs.