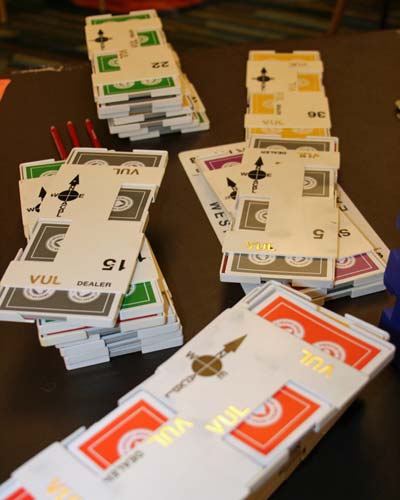 Bridge uses a deck of 52 cards and the dealer responsible for dealing rotates clockwise after each hand. The cards are shuffled before each hand and the dealer deals one card at a time in a clockwise direction to all four players until the entire deck has been dealt. The dealer starts dealing the cards to the player on his or her immediate left and continues clockwise until all four players have hands consisting of 13 cards.

The exception to this is when duplicate bridge is being played where the hands are shuffled at the beginning of the Bridge session and the identical deal is used by all the tables in play. Duplicate Bridge is opposite of the normal Rubber Bridge in which the cards are randomly distributed because of the shuffle. By removing the variety amongst the tables in play during a Duplicate Bridge event, the best played identical hands result in the best pairs rising to the top of session. Duplicate Bridge aims to reduce the chance in each pairs’ score making for exciting, relatively fair tournaments and competitions.

During Duplicate Bridge deals players normally do not put their cards into the center of the table but instead keep their hand in a neat stack in front of themselves while they play each card. In this way, all four thirteen card hands can be moved to the next table to be played with the identical deal. At the end of the trick, the player puts his card face down and the direction the card faces (horizontally or vertically) keeps track of which team scored that trick allowing for the score to be figured out at the end of the hand. At the conclusion of the hand each player places their respective hand into the correct slot in the Bridge board and taken to the next table to be played.

During large events like the Bridge Nationals or the Bridge World Championship many Duplicate Bridge deals will be played so the boards are all dealt out prior to the event. Technology has aided the tournament directors by having automated dealing machines.