The Buffett Cup takes place every two years with an American bridge team verse an European bridge team. Similar format to the Ryder Cup’s Europe against the United States golf challenge, the Buffett Cup actually is played nearby and right before the golf tournament. The Buffett Cup gets its name from the world famous businessman Warrenn Buffett, a famous bridge player. Sponsoring the event since its inception in 2006, Warren Buffett has helped make the Buffett Cup one of the most looked forward to international events in the world of bridge. Recently, the Bermuda Bowl is shown live on Bridge Base Online where you can view the hands at each table as they unfold.

Teams from America and Europe are constructed by inviting some of the most respected and renowned players from both sides of the Atlantic Ocean, with at least two players on each team being female. The Buffett Cup Trophy is awarded to the winning bridge team using point-a-board scoring. The events include sessions with teams of four, pairs and individual making winning a total team effort. Team Europe and Team USA both have 12 players plus a non-playing captain. All 24 players play during each session with 6 tables running team, pairs and individual games. Participants play in all of the games over the course of four days. There are 198 possible Buffett Cup points that will be earned by American and European teams so the first team to get a majority, which is 100 points, wins the Buffett Cup. If at the end the score is 99-99, then the winning team from the last Buffett Cup retains the title. Team events have a total of 72 Buffett points, pairs events award 60 Buffett points, and individual events have 66 Buffett points.

In 2014 United States against Europe, in Europe. 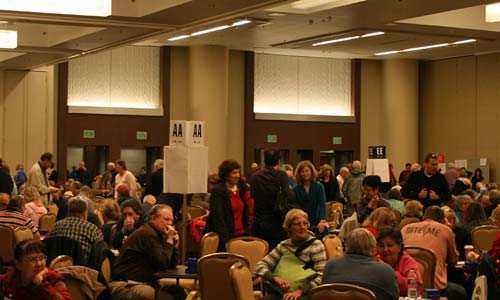 The Europeans have some of the most internationally recognized players and some who are arguably the best to ever play the game of bridge. Norwegian Geir Helgemo, Norwegian Tor Helness, Irish Tom Hanlon, Irish Hugh McGann, Italian Fulvio Fantoni, Italian Giorgio Duboin, German Daniela Von Anim, German Sabine Auken, English Jason Hackett, English Justin Hackett, French Michel Bessis, French Thomas Bessis have team up with many other great bridge players who have represented their nation as part of the European Buffett Cup Team.