The youth bridge movement is an effort to attract and retain young bridge players. Supporting the next generation of players is vital to the health of the bridge tournaments and the card game of bridge itself. Most people consider playing bridge an enjoyable, challenging lifelong activity but from school age on younger people have so many options on how to spend their free time that very few are even presented with an opportunity to learn how to play contract bridge.

The sad fact is that the average age for bridge players is about 70 years old, a number that has steadily increased over the past decade. The rate in which new players are learning how to play is not keeping up with the more veteran players getting older. In fact, many players are passing away and this has hurt local bridge clubs and tournament attendance. In 2005, the ACBL members had an average age of 67, a number that has climbed every year since. Only about a few percent of ACBL members are under the age of 40.

Famous bridge players Bill Gates and Warren Buffett have donated over a million dollars to promoting bridge in junior high schools which has helped bring attention to the issue and promote the educational benefits of learning a highly skillful, strategic card game. Other youth bridge programs are underway at a few high schools and junior high schools around the country but clearly not enough. Several thousand students learn bridge in school each year by programs led by members of ACBL.

How to promote youth bridge?

Many opinions on how to promote bridge to young people have been discussed. The game can be quite a challenge to learn and difficult to master, costly to play at clubs and tournaments, and has a stigma of being a slow paced game played at the kitchen table by old ladies. With technology, video games, sports and other activities young people are not going out of their way to learn how to play bridge. 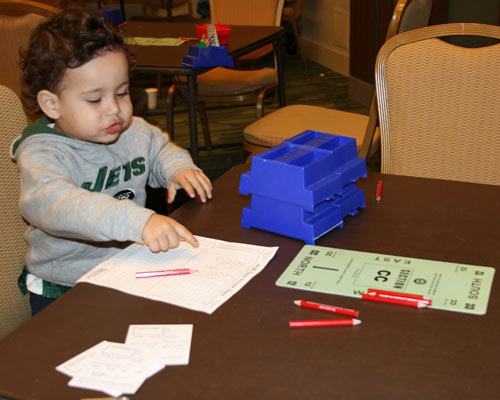 The best learning opportunity for young players to be exposed to the game are by educating students at school and during after-school programs. Many young people quickly find out how exciting and challenging it is to play bridge against their friends after they are introduced to it through school programs.

The other great opportunity to attract new players is through technology and Internet. Playing online is faster paced and games for players of all skill levels can be found at anytime day or night.  Playing online can make new players feel less pressure and less anxiety about having to keep score and all of the rules as the game software handles the control of the game. Furthermore, bridge applications and software are available for the mobile devices that most young people spend considerable amounts of time using to play games. Online bridge is one of the more popular card games that are offered by many social game sites, which has resulted in an increase in the number of teenagers and those in their twenties getting exposed to the game for the first time.

To promote youth bridge participation in tournaments it has been suggested to create prize pools making winning more rewarding.

The youth bridge movement has benefited from the efforts of many individuals who have used their time and resources to promote the game to students. We need to continue to find ways to introduce our fun game to young people in order to make sure that contract bridge can reverse the aging trends.